In 2001 Judge Finch ruled that Belynda received ineffective assistance of counsel and ordered a new trial. Another court overruled his decision. Click below to read his opinion, a powerful recitation of the evidence of Belynda’s innocence.

In 2014 Belynda’s Innocence Project attorney argued that Belynda should be granted DNA testing. Below is an excerpt from that hearing in which the judge notes a discrepancy between an investigator’s testimony at Belynda’s trial and a lab report. 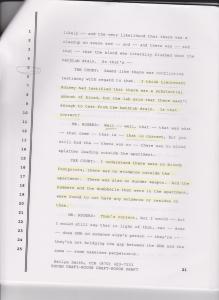